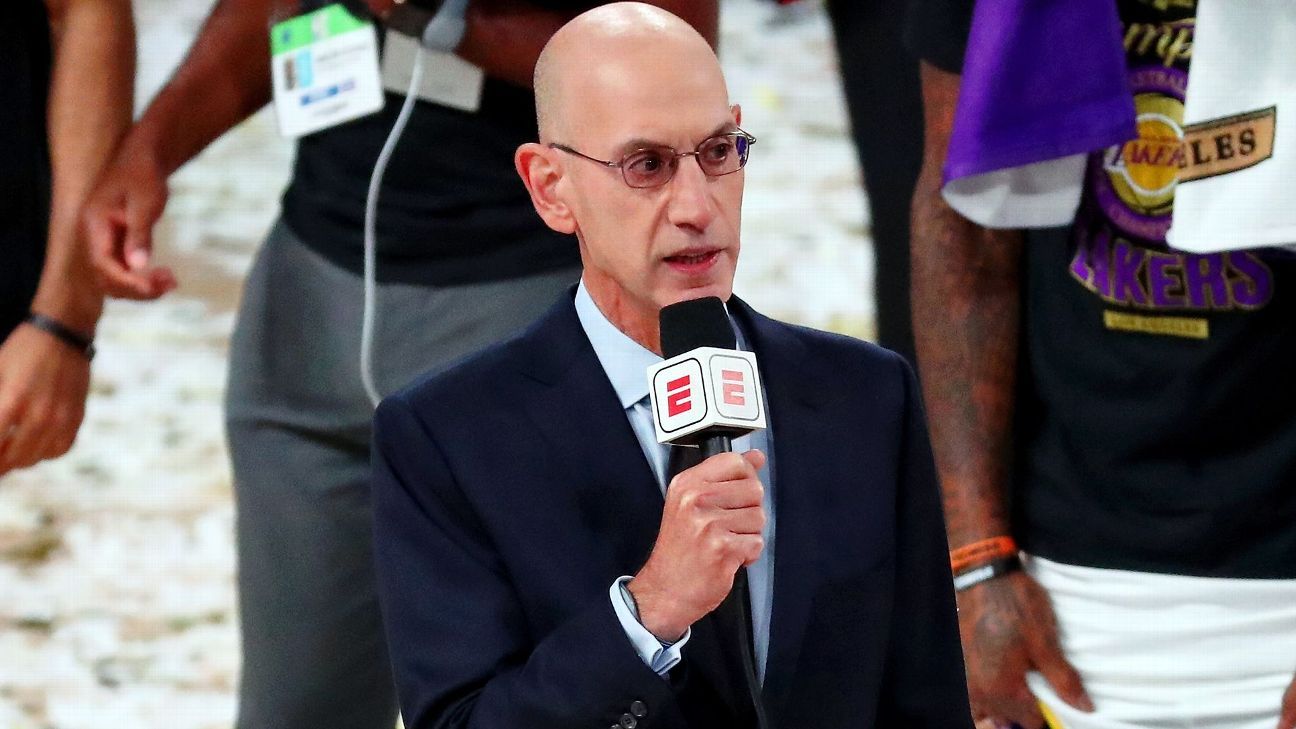 PHOENIX — NBA Commissioner Adam Silver said the league’s ability to get over a million fans back into attendance during the playoffs has helped the league stem its financial losses related to the COVID-19 pandemic.

“We did somewhat better than we initially projected,” Silver said Tuesday before Game 1 of the NBA Finals. “We don’t have the exact numbers yet, but maybe we’ll be down roughly a third in revenue, something around there, instead of 40 percent.”

Silver added that while the burden for those losses will be shared by both franchise owners and players, because of the way the league splits up Basketball Related Income (BRI), he was hopeful that “if things continue on track, we could move toward a new season, next year that looks a lot more like normal” and “we’ll have weathered [the pandemic] very well.”

As he does every year before the Finals, Silver addressed a host of NBA issues: the future of the play-in tournament, injuries to star players, the league’s record on promoting social justice after last season’s joint resolution and commitment to do so with the players association, expansion, whether the Toronto Raptors will return to playing in Canada next season, and progress — or lack thereof — in creating more diversity in the NBA coaching and front office ranks.

Silver said that keeping players on the floor is of paramount importance and that he had “no doubt” this year’s condensed schedule, additional health and safety protocols and other challenges contributed to injuries. But, Silver said, “none of it is an exact science. It’s something that even pre-COVID, as you all know, we were very focused on at the league.”

For example, Silver noted, “resting was up over 100 percent” this year from the previous year but injuries still went up.

“The issue which we’re trying to get to the root of is: ‘Does resting work, frankly? Does load management work?’” Silver said. “What’s most surprising, as I said it’s not just about injuries up this season; we have seen this upward trend for several years. You would like to believe that with the investment, the level of sophistication, the number of doctors, the amount of analytics we look at, the data that we collect that we couldn’t in the old days, that putting the pandemic aside, we would have seen improvements and we haven’t seen that yet.”

Silver added he hoped that teams would come to see their injury and load management strategies in a more communal way, not as proprietary information, because the effect on the entire league was so important.

As for the play-in tournament, which drew huge ratings and improved competition at the end of the regular season, but also criticism from stars like LeBron James and Luka Doncic, Silver said he thought the tournament was here to stay, but the league would consider tweaks to the format.

“Ultimately,” Silver said. “Although there were critics, not just LeBron but others who weren’t in favor of it and maybe some teams who weren’t thrilled with it, I think overall it was very positive for the league and the players.”

The idea of expansion, which was raised as an idea to generate revenue during the pandemic, seems to have been placed back on the backburner, Silver said.

“I know that was reported that when revenues were down we were looking more seriously at expansion,” Silver said. “It didn’t work exactly like that, largely because expansion is a multi-year process. So it wasn’t as if the pandemic came, we’re 40 percent down, we can quickly collect some expansion revenue.

“It’s true that we actually had some time while we were initially shut down, and we were meeting more often with our teams, to think a little bit more about it. But it seemed the consensus was certainly during a pandemic that wasn’t the right time to expand, but that we should continue to consider it.”

On the issue of diversity in NBA front offices and coaching staffs, Silver said “obviously we have seen positive developments there in terms of the number of vacancies that are being filled,” but that “it was important not to rest on our laurels there.”