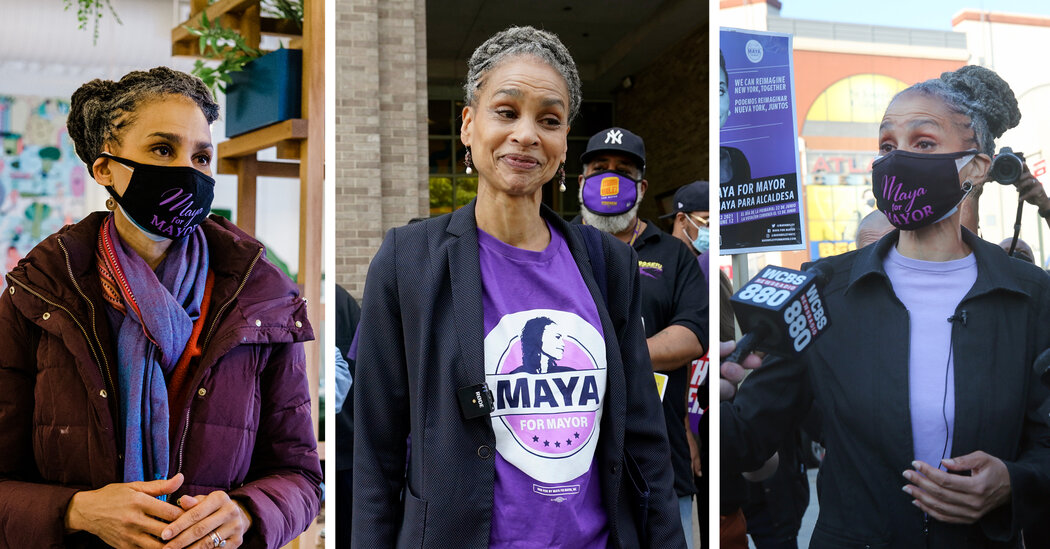 The candidate for New York mayor has consciously picked a signature shade. Here’s why.

Not exceed her allotted response time (though she did do that) or go on the offensive when it came to stating her position as a mother and how it informs her plans for “smart policing” (though she also did that), but, rather, switch up her usual purple jacket, her official campaign color, for a bright red one.

“Red is bold, vibrant, living, pulsing and signifies, ‘Bring it,’” she said in an interview in March. It means: “You want to go? We can go!”

Ever since she entered the race, Ms. Wiley has used color to differentiate herself. Each candidate has embraced the idea of a visual signature to varying degrees: Raymond J. McGuire’s sharp tailoring calls to mind his background as a Wall Street executive; Dianne Morales’s black turtlenecks recall the no-nonsense disruption of Steve Jobs (and, perhaps, less salubriously, Elizabeth Holmes); Andrew Yang’s lack of a tie, his striped scarves and “Math” pins and hats bring to mind his background in tech.

But Ms. Wiley has hewed to a political strategy of coordinating the colors of her campaign and her clothing more than anyone else.

There she was, on Oct. 8, 2020, standing on the steps of the Brooklyn Museum wearing a bright plum peak-lapel blazer and coordinating fuchsia scarf. She wore purple again — this time lilac — for her first televised ad campaign.

And she wore amethyst for the first virtual primary debate, broadcast on NY1 in May. Though she has appeared in other jewel tones since the campaign began, like emerald, jade and sapphire, purple is by far the defining color of her candidacy.

Her competitors have taken notice.

Ms. Wiley recently spoke out against the rise of anti-Asian rhetoric and condemned a racist caricature of her opponent Andrew Yang in The New York Daily News (similar to one of the Obamas on a 2008 cover of the New Yorker magazine). To thank her, Evelyn Yang, Mr. Yang’s wife, tweeted a photo featuring the Yangs with Ms. Wiley, in which both Ms. Wiley and Ms. Yang were wearing purple.

“Thank you for your leadership @mayawiley. You were also the first to condemn the backhanded racist innuendo from the beginning. It was a pleasure to meet you, and I’m wearing your colors!” Ms. Yang wrote.

Unlike the purple worn during the Biden inauguration, Ms. Wiley’s purple is not about bipartisanship, she said. On the contrary, it’s about making references to her “shero” Shirley Chisholm, the first Black woman elected to Congress. Ms. Wiley is, after all, running to be the first Black female mayor of New York. It will not be easy: There are eight major candidates, and not one of them has established a dominant lead. (Ms. Wiley has strong support among the progressive wing, with endorsements from Alexandria Ocasio-Cortez and Elizabeth Warren.)

“I launched in purple on purpose,” said Ms. Wiley, who was the first Black female counsel for the mayor of New York, and a former NBC News and MSNBC legal analyst. (She still appears on NBC as a volunteer guest analyst.) “Purple was Shirley Chisholm’s color.”

According to Patrick Egan, an associate professor of politics and public policy at New York University: “Purple was often the color of royalty, going way back. A candidate for an office like mayor of New York City has to walk a delicate line. New Yorkers like to think that their candidates for elected office are of the people, but we also like them to have a bit of pizazz and chutzpah that says that this is a person who is a cut above at the same time.”

In her Brooklyn home office, surrounded by books and ephemera like small sculptures and candles atop low, double-decker bookshelves, Ms. Wiley elaborated on the idea over Zoom.

“Shirley said, ‘People have to feel you,’” she said. “In typical campaign mode, pre-Covid, you get all these different ways for people to feel you — you can be with them, talk to them, look them in the eye.” But because so much of the campaign is happening remotely, she said, “appearance is even more important in helping people to feel me and know who I am.”

Though she is aware of the way appearance has been used for and against women, especially Black women (remember the to-do about Michelle Obama’s arms in an official White House portrait during her time as first lady?), and the fact that, as a result, most female candidates have refused to engage with the topic, she has a different approach.

Chalk it up to her experience on TV, where she was keenly aware of perception and the balance between “drawing the viewer’s eye” and getting them to hear the message, as she told The New York Times in an earlier interview.

As she said this, Ms. Wiley, 57, was wearing the same power-shouldered Anne Klein lilac blazer she had worn in her ad, as well as small interlocking hoop earrings from the Makers Show at City Point Brooklyn, a pop-up shop created by Julie Feltman to support local female entrepreneurs.

“Blazers are perfect for me because I just do a black T-shirt and pants underneath,” Ms. Wiley said. “I get to be comfortable and casual at the same time.” In any case, the style choices are her own; she does not use a stylist and doesn’t solicit input on her dress from her staff.

According to Peppermint, the trans actress and performer perhaps best known for her roles on “Pose” and “RuPaul’s Drag Race,” who is a supporter of Ms. Wiley, the candidate’s image is important.

“There’s often pressure for Black women to conform to ‘societal norms,’” Peppermint said, noting that Ms. Wiley’s hairstyle in particular stood out as reflecting her “community” instead.

Hollywood actresses including Nia Long and Gabrielle Union, as well as news program hosts like Joy Reid, have publicly discussed the behind-the-scenes struggles Black women often face in the public square, especially when it comes to judgments about their hair.

Ms. Wiley does her own hair and does not dye her natural gray because, she said in a 2019 interview with The Times: “I earned every last one of these. I turned it into an attitude.” She called her intricately twisted up-do “my crown.”

In the March interview, Ms. Wiley said she first became aware of style as a small girl growing up in Washington, D.C. when her grandmother made her dresses and sent them to her from Texas. Ms. Wiley believes in color, because, she said, “color is joy.” “Running for office even in a traumatic time doesn’t mean losing all the joy that we can find,” she said.