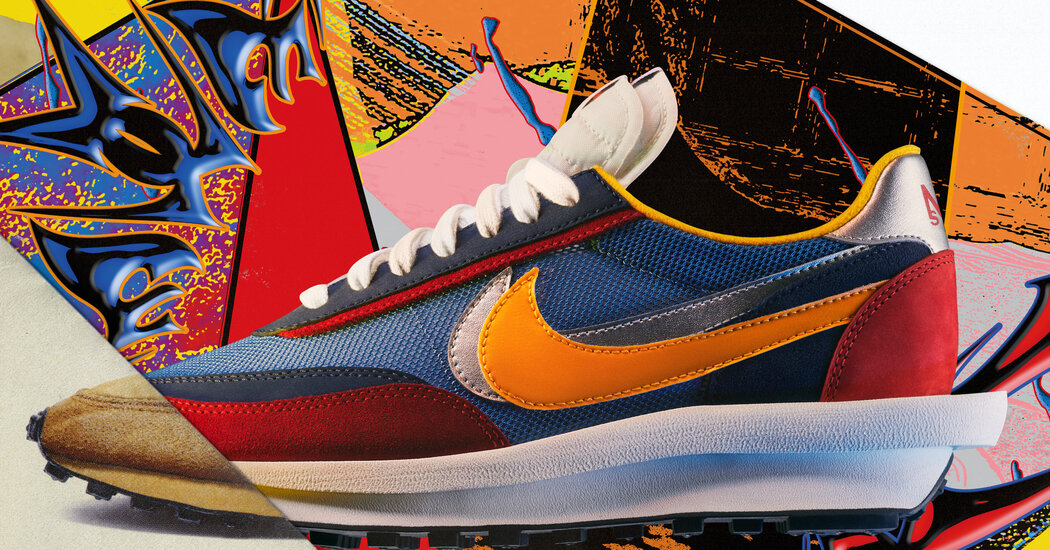 You think they randomly choose those glaring shades of Nike, Adidas and New Balance? Think again.

Aqua blue, acid lime and grape purple. Electric orange interspersed with neon pink. Gray suede and cheetah print mixed with white and gold. These are not descriptions of a minimalist’s worst nightmare, but rather new color combinations from Adidas, Reebok and New Balance. And they are jarring by design.

In the age of the infinite scroll and the era of sneaker culture, where the competition to make the hottest, rarest, most wanted kick is more intense than ever, the shoe that clashes shades with the most force stops traffic — at least of the online kind. As a result, athletic shoe companies are increasingly becoming fluent aficionados of that old art: color theory.

The links between color and emotion have been studied for centuries, from Carl Jung’s color coding of personality traits to focus groups evaluating the ways in which candy colors can affect perceptions of flavor. Drug companies color their pills “cool” or “hot” according to desired effect (hypnotics are often blue or green, antidepressants yellow), and we use SAD lamps in winter to replicate the energizing qualities of a sunny day.

Little wonder that sneaker brands have departments dedicated to manipulating minuscule shifts in shades, as well as engineering the visual equivalent of a crime scene so you rubberneck online. It’s their mission to create feelings and accelerate business.

“Between 70 percent to 90 percent of subconscious judgment on a product is made in a few seconds on color alone,” said Jenny Ross, the head of concept design and strategy for lifestyle footwear at New Balance. “It can excite or calm us, it can raise our blood pressure. It’s really powerful.”

So while the bread and butter of most brands remain the basics — the Nike Air Force 1 was the best-selling sneaker of 2020, and its default is all white — the pieces that power the continued churn and buzz are the limited-edition collectibles that tap into our subconscious to create desire.

Sometimes the triggers are obvious: The use of Varsity Red, for example, summons up Ferris Bueller collegiate nostalgia; gold and purple call to mind a Lakers game; and white is associated with racket sports. But in fashion, color is also your brand. Fendi is yellow, Hermès is orange and Tiffany is blue. Thus sneaker brands toggle between their core colors and wild experimentation.

New Balance, for example, is rooted in gray, omnipresent every season, suggestive of the urban running shoe, riffing on concrete. “Doing gray right is something we take a lot of pride in,” Ms. Ross said. “Every gray on our color ring has a character and personality: Castle Rock is warm; Steel is a blue tone. With legacy models, we make sure our tanneries never stray. They replicate with precision.”

At the other end of the dial is Nike, with its neon lime Volt color, first seen at the 2012 Olympics. To some it is heinous, to others a masterstroke. “That was an intellectual and scientific choice for Nike,” said Bryan Cioffi, Reebok’s vice president for footwear design. “The first color you read in your optical receptors is that super-bright lime. It’s possibly an evolutionary take from poisonous animals and signals danger. A physical thing happens when you see it. Nike triangulated that and repeated it forever.”

Repetition is how you win the color game. You may see Volt and recoil, but you’ll always think “Nike.” As colors go, it is a paradigm for brand marketing. “We did a complete technology innovation study about how color showed up on HDTV and sports tracks,” said Martha Moore, a Nike vice president and creative director. “We were studying the idea of speed and what color complemented that in the vibration of the human eye. Volt is emotional.”

After a year of living our lives almost wholly online, pixel coloration has become even more key. “We are developing colors that appear lit from within,” Ms. Moore said. “Pixels sitting next to one another create previously unseen colors. They create new neutrals and complex combinations. We are using complex knits of yarns, with bright spots and glows that haven’t been seen before.”

Indeed. “We are seeing a particularly positive response to dialed up pastels and strong yellow,” said Heiko Desens, the global creative director of Puma. “Things that speak of energy and positivity.”

That new energy is everywhere. For example, the Yeezy Boost 700 Sun shoe, introduced in January, is a blaze of yellow and orange that is a world away from the beige associated with Yeezy of yore. Hardcore Rick Owens fans may own numerous black pairs of his Dunks, but the new season’s Geo Baskets in bubble gum pink throw a curve ball and flip the dark Owens aesthetic.

Bright solid colors can also be shorthand for specific cultural references. “We use a yellow that is forever connected to the footballer Pele,” said Melissa Tvirbutas, the global head of color and material design at Puma. (Even her title speaks to the growing role of color theory.) “And it doesn’t matter how old you are. If you’re a football fan, you’ll encounter his history with two or three clicks, so younger people still get the reference.”

Last year Reebok released a “Ghostbusters” collaboration, “and we went deep to find the exact colors used onscreen to be hyper-authentic,” Mr. Cioffi said. “We are working on a launch for next year linked to a ’90s superhero TV show, and our team watched 1,000 episodes, taking copious notes like I’ve never seen before. They looked into the materials used by the dye house that worked on the costumes at the time of production.”

Television and gaming are recurrent themes in sneaker colors. Some of the referencing is retro — like the Puma RSX Toys series conceived as limited-production “collectibles” and decorated with primary graphics that bring to mind Rubik’s Cube. Some of it is contemporary, like a new line of Instapump Furys that have a console-style “on” button graphic on the Instapump itself.

One of the Console designs from the Reebok Glitch collection of Furys is executed in white and green, with a Pump button featuring a red ring that will be a familiar sight to hard-core gamers when their consoles are malfunctioning. “We wanted to play with the idea of glitches on computers that we deal with at work, on social media and with apps crashing,” said Joe Carson, the Reebok designer, who also incorporated a metallic webbing on that particular shoe as a nod to the flip side of game discs.

Beyond the obvious, however, we all have complex personal relationships with colors. To some, these carefully chosen and configured sneaker shades and patterns may just look interesting, a mess or simply pretty. But to others they’ll feel something poetic, perhaps profound. That’s where color theory gets deep.

Grace Wales Bonner’s collaborations with Adidas beautifully conjure the 1970s, in particular the style of the Jamaican and second-generation Jamaican community in London during that era. For her latest sneakers, the designer said her soft color palette was inspired by “iconic Jamaican filmmaking.”

“I was interested in exploring colors that have faded in the Jamaican sun,” Ms. Wales Bonner said.

Ms. Moore at Nike likewise noted that their mood boards for color often encompass cineaste influences. “We might want a Wes Anderson versus a Sofia Coppola feel,” she said.

Then there is Sacai’s hybrid take on Nike’s VaporMax and Waffle Racer runners, which layer double swooshes in “campfire orange” on “dark iris” in what Ms. Moore called “authentically sport with a futuristic visionary spin.” Not to mention the Puma Mirage Tech, which purposely clashes colors from different eras in a way that resembles the digital display on DJ hardware.

“It’s a remix,” Mr. Desens of Puma explained. “We wanted to link them to electronic music culture.” As an abstract expression of EDM, it’s arrestingly effective. It makes you feel upbeat. It’s disco.

And it’s why color theory matters more than ever when it comes to what you put on your feet. “We consider multiple views of a sneaker at a very early stage in its design,” Mr. Cioffi of Reebok said. “We’re looking at gloss and backlighting more critically How does this hue of blue translate at 8 p.m. on your Instagram feed when your phone battery is low? It’s worth overthinking.”